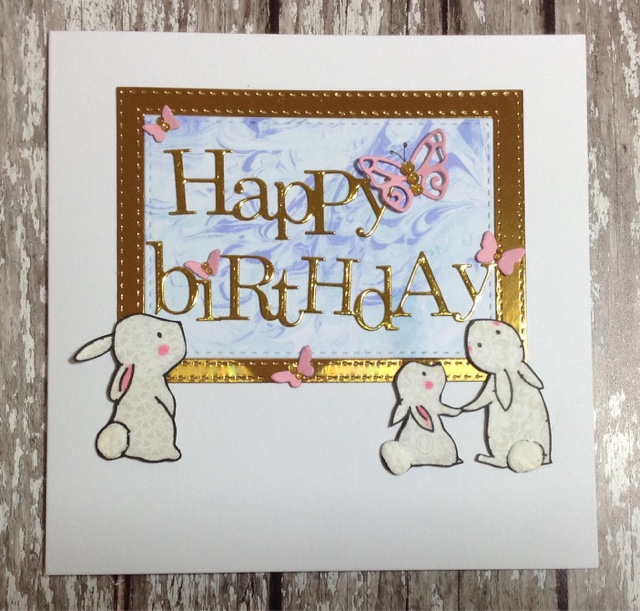 I've not managed to escape over to Pixie's Snippets Playground for absolutely ages, but as I managed to tip over the box that contained the trimmings from making the wedding album for my parents golden wedding last year all over the floor, I figured it was time to pay a visit.
I started off by stamping some bunnies from the Dreammes Binky & Bo set on some of the patterned paper off cuts in versafine and then fussy cutting them out and adding a little pink marker to their cheeks and ears. I was messing about with some shaving foam and distress reinkers the other day and so trimmed a bit of one of those papers down with Simon Says Stamp stitched rectangles. Using some leftover gold mirri card I die cut a frame and the memory box  jumbled happy birthday and added them all to a 6x6 card blank.
I added the bunnies with some foam tape and put some Woodware Fluffy Stuff on their tails. As you have to heat emboss this to activate it, it warped the card slightly, so I'd probably do that step before adding them to the card in future. I also discovered that if you put the card under a pile of books to get rid of the warp, it flattens the fluffy stuff. You can then reheat and puff it, but it tends to overheat and discolour slightly. Can you tell this was the first time I'd used it?
I spent aggggges looking for my little set of All Occasions 3 butterfly dies. I still haven't found them, but I did find a set of butterfly dies that were free with a magazine recently and so managed to add the large butterfly from a scrap of pink card. I also found my Memory Box Dancing Butterflies die that I hadn't seen for ages and added the tiny butterflies to the card. Some glittery gold gems from Papermania for their bodies and job done!
Posted by Cara at 14:09