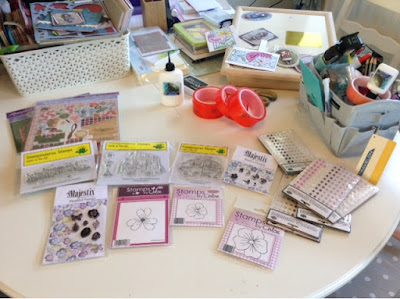 Whoops! I didn't realise it had been so long since I last blogged. I've been having problems with my pain management and so have pretty much been getting home from work and crawling into bed. We then had a few days up in Scotland for the Scottish and British Goldpanning Championships. Hubby won the British Open title again. I took some crafting with me to do in the evenings, but it stayed firmly in the bag.
Anyway, despite the lack of crafting I thought I'd join in with What's on your workdesk Wednesday.
The majority of what's on my desk is my haul rom last weekend's Great British Crafting Festival at Bolton. Hubby put up with being dragged around it as I went to Scotland with him. We each got the free gift from Hunkydory and I stocked up on red liner tape and glue. Unusually for me I didn't buy any dies, but bought some card-io stamps that I've been eyeing up for a while, some of Chloe's flower stamps and some fab stamposaurus stamps which might end up on cards for my Dad...
Posted by Cara at 17:37