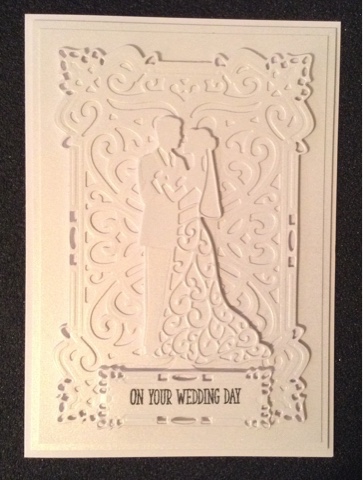 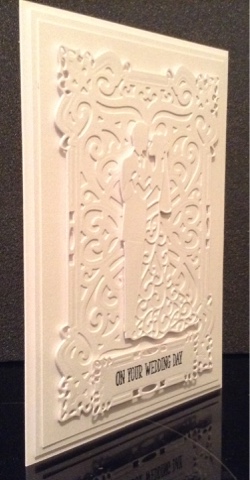 It's Saturday and so it's time for a new challenge over at Sweet Stampin'
The challenge theme this week is Anniversary/Wedding/Love, so plenty of scope there, and we are sponsored this week by Crafts and Me.
I had intended on using a wedding card that I was making for my DT card this week, but I suddenly realised that I didn't know the groom's hair colour and so couldn't finish colouring in the stamp! I quickly came up with Plan D (we won't mention Plan B - in the bin or Plan C - rejected on the table under a pile of stamps and paper).  There is stamping included in it, but only a teeny bit, (remember to include some stamping on your entry to be in with a chance of winning).
I used some white with hint of gold centura pearl card to die cut the Sue Wilson Granada die from her Spanish collection, (it is whiter in reality, honest!) I used the same card to die cut the Sue Wilson bride and groom and also to add two base mats on a 5x7 card blank. I stamped the Clearly Besotted mini message on the centura pearl and used the smallest die in the Granada set to cut it out. Obviously, I used some of my humongous roll of 1mm foam tape to add some dimension to the card. Hopefully the second picture shows some of the definition which is more obvious in reality. Think I need to go on a photography course!
Have a great day and keeeep stampin' (to be said in the style of the Strictly Come Dancing "Keep dancing" - totally looking forward to seeing them being paired up tonight.).
Posted by Cara at 08:00