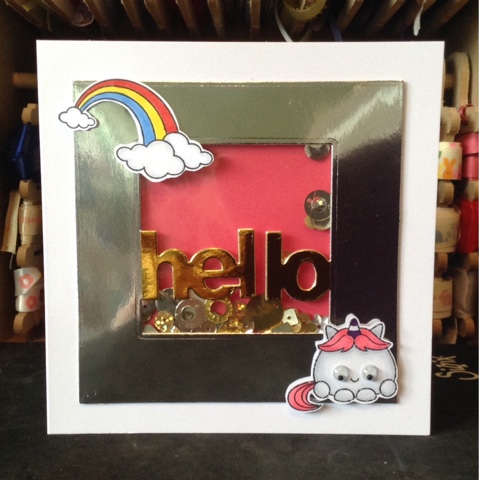 Hello! I went AWOL yesterday, my neck has been playing up lots the last couple of weeks (not that I like to admit it to anyone, least of all myself). I hoped that not commenting for a bit would help, but apparently not, so after work it was a very very early night with some extra painkillers. Hopefully, when finances are on a more even keel, we can look into changing my car for an automatic. Various doctors and nurses have said that not having the use the gear stick all the time would help.
Parsley is doing well. He's not impressed at having eye drops, but he is allowing me to put them in, even if it means he shows his disgust when back in his run by flicking his back feet and thumping! Got to love them.
I managed to get a bit of crafting done this afternoon and made three cards in total. I spent some time earlier this week stamping and cutting out images so I assembled the bits into some cards.
I used a clearly besotted die that I got in their clearance section recently and cut it out of gold and silver mirri. I used my fuse tool to make the shaker element and added it to the back of the die cut with a bit of pink card behind it. I added a rainbow from the magical unicorn stamp set and the little unicorn is from the new Clearly Besotted Be Lucky set and has a touch of wink of Stella on him (or her?). I couldn't resist adding some googly eyes to finish!
Posted by Cara at 17:51