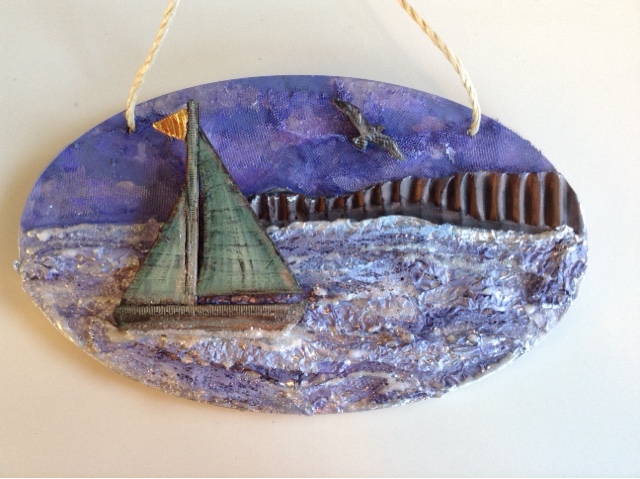 So I came across the Creative Carte Blanche challenge from Hels Sheriden's blog. Doing mixed media work is something that interests me but which I've never really tried or had the confidence to try. I decided I was going to have a bash as the current challenge is to include corrugated, lace and metal. I had an initial concept working with a dressmakers form, but we all knows what happens to the best laid plans...
As I've mentioned I had a blast at the InkBuds weekender and so decided that I would crack on with this week. Well, whilst I was recovering on the Monday, Nigel the DPD driver turned up with a set of stamps and mdf shapes from creative expressions. To quote Gru from Despicable Me "Lightbulb!"
So, I had a blank plaque from Joanna Sheen and I added layers of blue and purple chalk paint as a base. I added some cardboard to create the cliffs. I layered up strips of tin foil to create the sea and tore up some lace to add to the sea texture. I ripped up some tulle to add texture to the sky. I used a mix of cosmic shimmer glue and glossy accents to stick it all down. Once dry I painted the sea with more purple, blue white and black chalk paint and the cliffs with brown, black and white chalk paint.
I stuck washi tape, paper and ribbon to the mdf boat and seagull to add some texture and then after a white base coat built up layers of chalk paint and dry brushed on some black to add dimension. I used   cut n dry foam with the chalk paint to add in the sky and some indigo blue metallic white to form the clouds, hopefully the picture below shows the subtle metallic. 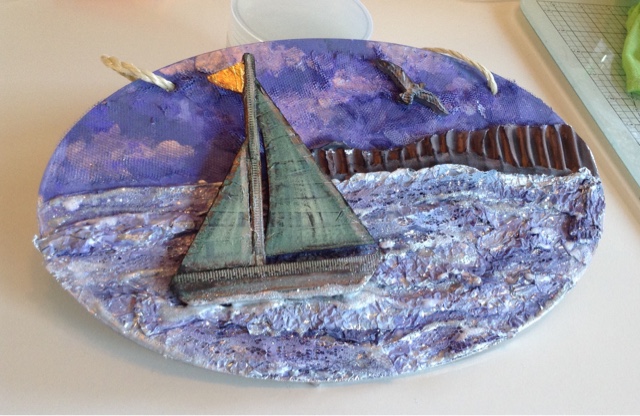 I decide to add some white pearl cosmic shimmer PVA to the waves. Unfortunately the nozzle had got clogged and so I removed it, unclogged it and squeezed. Of course the nozzle came off and the PVA covered my glass mat! So I dunked my finger in it and dabbed it on that way. I also had some silver pearl PVA which I unclogged carefully this time and applied that to the waves. It still needed something so I decided to throw on three things to stick to the PVA and a bit more cosmic shimmer glue that I'd added. I scattered glamour dust, cosmic shimmer crystal chips glitter jewels and clear micro beads to give the sea more life, hopefully some of the sparkle shows up below. 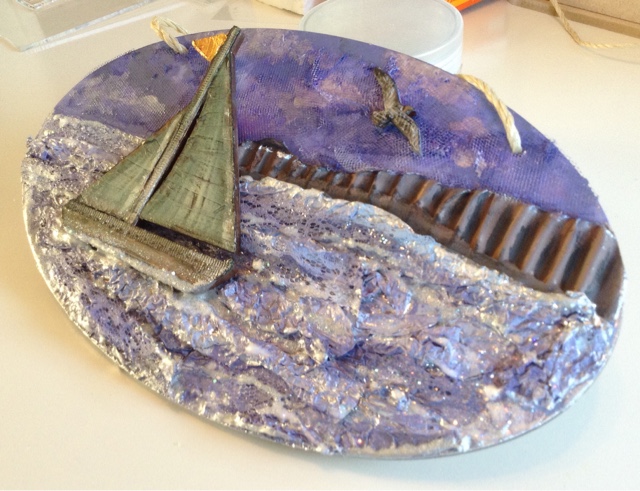 I glued on the boat and seagull and added some twine from the kitchen to hang it up after it dries and stops shedding micro beads.I'm not saying it will win any prizes in the art world, but I had great fun playing!
A final view to show you the dimension. 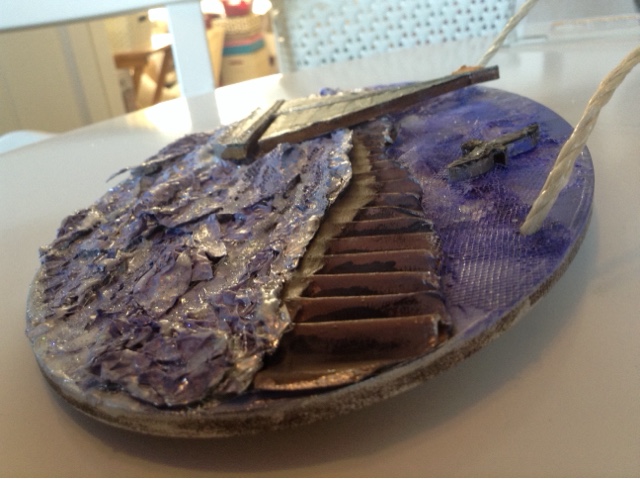