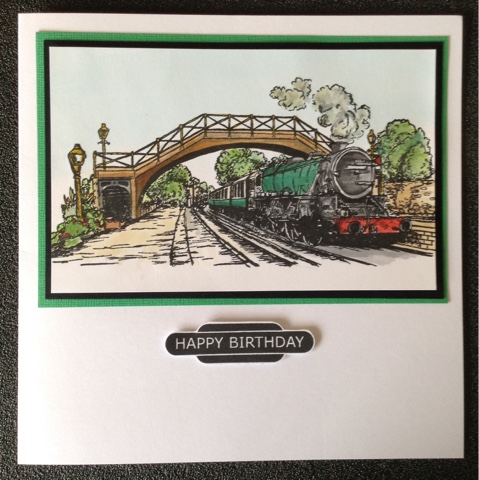 It was Dad's birthday yesterday and this was the card I sent to him. I stamped the Sheena Douglass train stamp in black versafine on smooth watercolour card and coloured it in with distress reinkers. I trimmed the panel down and added black and green layers to fit on a 7x7 card blank. I stamped the sentiment from the set and fussy cut it and added it to the card with some foam tape.
I ended up having my tooth extracted at the Dentist yesterday. He X rayed it as he was concerned that the lump inside my mouth might be a cyst as it was so solid. It was as I thought, an infection and he talked me through the X-ray on the computer screen which was actually very interesting whilst we discussed options. Given that the tooth already had one root canal and a gold crown, even with further treatment the long term prognosis was poor and so I opted to have it out. Fortunately the local anaesthetic did the trick and with a bit of pressure and effort from the dentist it came out cleanly. I could have an implant to replace it but at a minimum of £2,000 I decided against it - that's a lot of crafting stash! I'll probably have some bridge work on the NHS when it heals instead.
I obviously learnt something on my forage day though, as when I was sat in the car park giving myself a minute to settle before driving home, I noticed one of the nightshade family growing through the hedge!
When Hubby got home he asked how I'd got on. I explained what had happened and his first question? "Did you ask for your gold crown back?" Talk about gold fever! Oddly enough, I had foreseen this and explained to the dentist who did indeed give me my crown back, complete with tooth as despite spending a few minutes on it had been unable to prise it off. As I said to the dentist, if Hubby is that desperate for the gold he can do it himself! At least I needn't worry about sleeping with my mouth open anymore...
Posted by Cara at 18:29