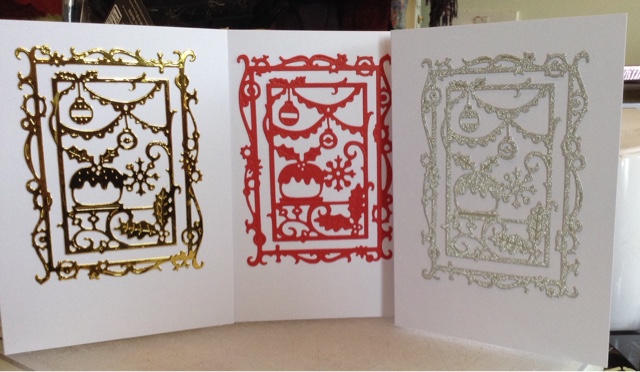 Typical isn't it, I have the week off work and my mojo is missing. I spent 4 hours this morning making a DT card, finished it and then realised it didn't have any stamping on it. Not good for a stamping challenge! Cue one hastily stamped sentiment.
I still hadn't managed to make my July card for a swap, but finally managed to cobble something together. I shall share it after the recipient recieves it.
A very simple bit of crafting this evening to relax. I bought the Creative Expressions Paper Cuts Collection Christmas Feast Dies, recently from iconuk and decided to take them out of the packet. I cut red card, gold mirri and Hunkydory Mirridazzle and glued them on 5x7 card blanks. Super quick and easy. They may be my mass produced Christmas cards this year, they cut perfectly even with the mirridazzle which is a pain as it has a thick plasticy layer. I still had to poke a lot of bits out with the mirridazzle but they came away easily and quite therapeutically! I also bought the Noel set from the same collection, so might have a play with them later. I think the frames could be quite useful as they are not overtly Christmassy and so can be used in everyday crafting and they are different but interchangeable between the sets. I hope mojo turns up tomorrow!
Posted by Cara at 19:42