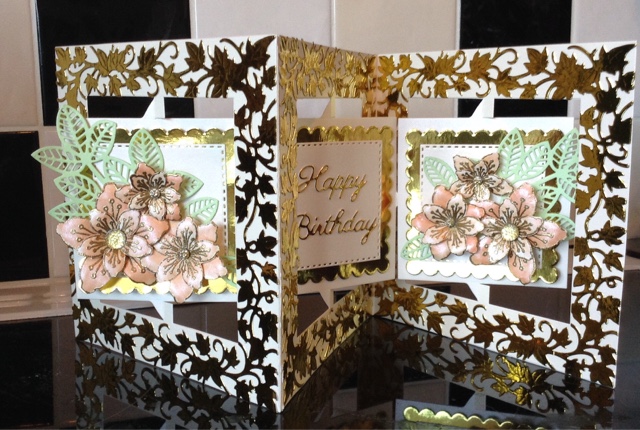 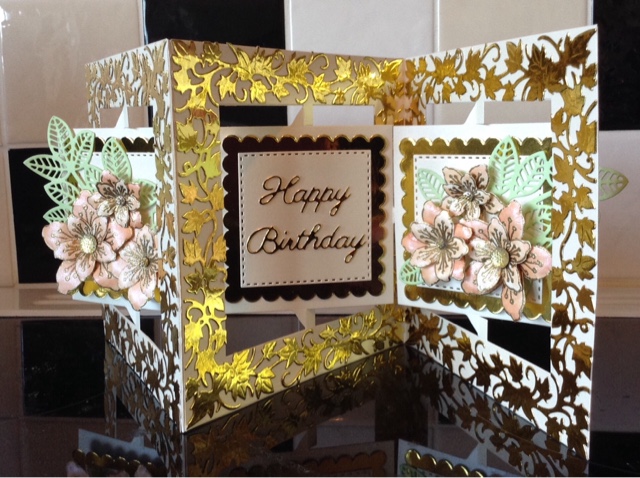 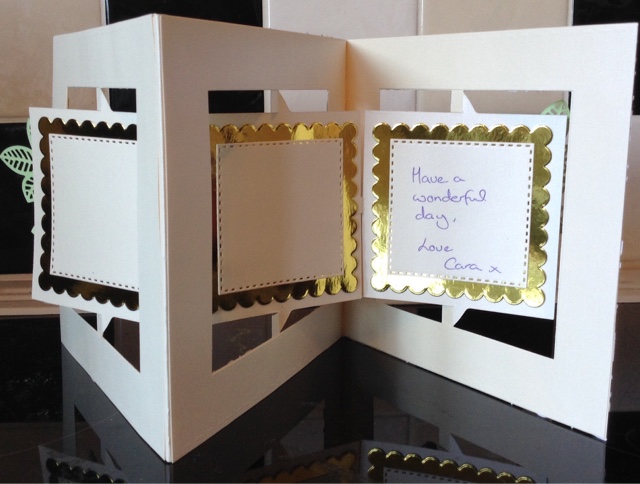 So this was the card that I finally made for my colleague. I hand delivered it to her at work as although I'm still off work they were having a birthday lunch for her. Apparently the birthday girl had gone with a colleague to the chippy to bring back a chippy lunch. Whilst they were there a young policeman came in and the birthday girl said very loudly "Are you my birthday stripper?" Cue a packed chippy laughing and a young policeman who went a very interesting shade of pink! Just as well she was on her best behaviour really.
Anyway back to the card. I used the crafters companion square accordion dies and the Christmas ivy overlay in Ivory pearl card and gold Miri card. My top tip, make sure all the square moving mechanisms are the same way up as otherwise you have to peel it apart and then have to recut the squares and snip out the middle to cover up the mess, hence the picture of the back. I used the matting and layering dies that came in the accordion set to dress up the squares. I had intended on leaving the back ones in Miri card apart from the writing but my cosmic shimmer glue made patterns that you could see on the Miri card - is it just me that has that problem?
I used a birthday die from Joanna Sheen for the sentiment. I stamped and gold heat embossed flowers from a Dreamees set and fussy cut them out. I added a bit of colour to the flowers using pink champagne spectrum noir sparkle pen ( I got a set of 9 free with a craft magazine subscription) and shaped them with a ball tool and stuck them in place with pinflair glue gel. I added little dazzlers that I found on eBay to the centres and used my copics to add a little yellow to the dazzlers as they were clear. I used a Sue Wilson die to add a little foliage and finally it was done!
I had to photograph it on top of the cooker as that was the only clear surface I could find!
Posted by Cara at 11:03