This is the last of the Christmas cards I made. This was for a card swap on the Craft Telly Forum, so I figured I ought to push the boat out as there are some beautiful cards in the monthly swaps.
I used the Crafters Companion accordion card dies for the base on dark blue card from Lidl. I know there has been some concerns raised about these dies copying the mechanism from another designer, but I bought them before I knew about that. I also used the crafters companion snowflake overlay, cut out of Hunkydory mirri-dazzle card. In real life it's incredibly sparkly, but doesn't show up to well in the pictures. It wasn't the easiest of things to die cut and there was a lot of picking bits out of the die cut, but I think the effect was worth it, even if ere were 6 panels to cut!
The two side panels were cut with the tattered lace reindeer snow globe die that was released w couple of years ago. The panels were slightly too small to take the full die and so I snipped it down to fit. Must say that the create and craft Miri card cut like butter.
The centre panel is Sue Wilson's let it snow die, again I snipped off a couple of swirls to make it fit. The accordion dies come with mat and layer circles and so I cut one out of white card and stuck it on the back of one of the circles to write on. 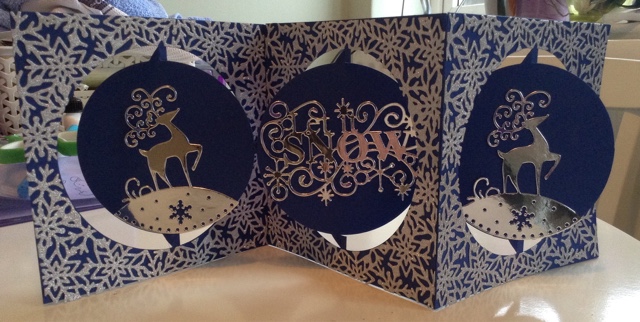 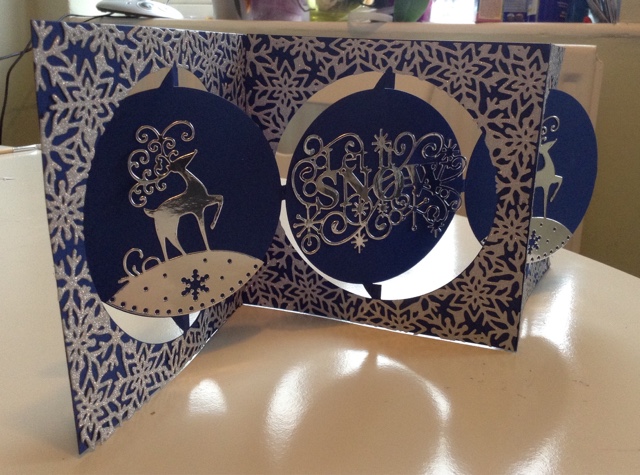