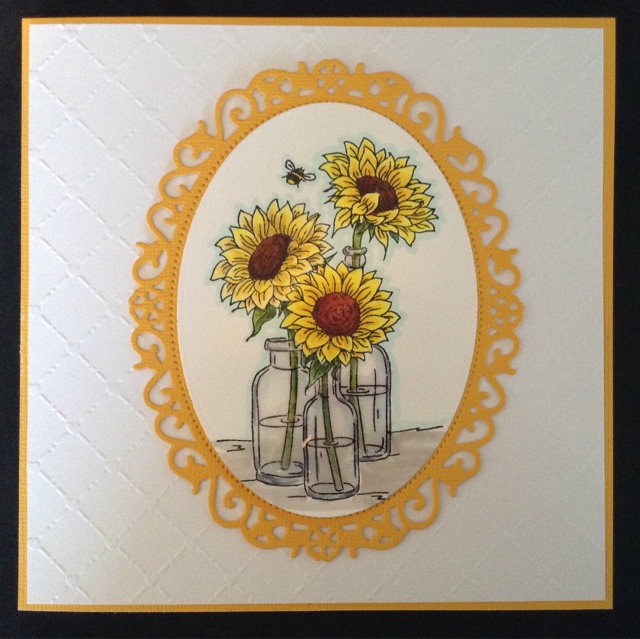 Phew, just managed to sneak in a quick card to end the day.
It's been a beautiful hot and sunny day here in Lancashire. I spent some time in the garden tidying up a couple of plants and hacking back the rhubarb that was trying to be a giant gunnera! I ended up composting some of the thicker stems as Hubby doesn't like it and my parents freezer is full of it! I've bunged some in the fridge and will stew it tomorrow. Working in the hot sun didn't help my drippy head, yay for showers! The bunnies are still miffed with me despite my offerings of dandelion and strawberry leaves. They made me laugh this morning. I called them in for breakfast and they wouldn't come inside the shed (they have a cat flap sized hatch into the run), eventually Parsley put his paws up on the hatch like a child at the ice cream van and grabbed his fenugreek crunchie off me, but Bramble wouldn't come. I looked out of the window into the run and saw Bramble running out from under their hiding step with a fenugreek crunchie. I think Parsley got mugged! I managed to give him another one later though.
Back to business after all that waffle. I made today's card with an lili of the valley image that I coloured whilst I was away and used a Spellbinders oval to cut out. I die cut the largest Spellbinders floral oval out of the middle of a 6x6 warm yellow cardstock and then used the rest to make a mat on my card base. I embossed Sue Wilson's heart lattice EF on White cardstock and trimmed to fit and assembled the card. Time for an early night methinks - I'm up to the start of today in blog posts now!
Posted by Cara at 20:21