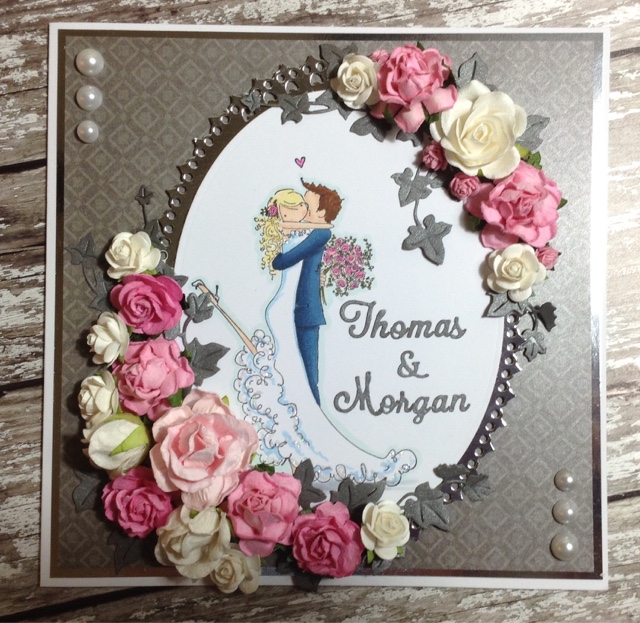 I hope you've all had a relaxing Easter weekend. Hubby has been away at his annual field target dodah thingy competition for the weekend and so I started the annual craft supplies tidy up whilst I could leave things spread out. Oddly enough, I seem to have more craft supplies than I did last year. No idea how that happened! I wasn't able to sort out everything, but I did manage to find the set of butterfly dies that had gone AWOL. Somehow though, I managed to lose in the process my Sue Wilson ivy die as featured in today's offering.
My colleague asked me to make a wedding card for her grandson who was getting married, now that he had completed his basic army training. The colours for the wedding were grey, pink and silver. Apologies for the glare on the pic, the silver mirri that I used for the background mat and the frame round the image wouldn't play ball.
As usual for my wedding cards, I used my Stamping Bella image coloured with my copics and my Spellbinders grand decorative ovals. Rather than go all cream and white, I used one of the left over papers from making my parents anniversary album for the background, it has a lovely pearlescent sheen to it in real life. I think it added quite a contemporary feel to it. I used a selection of flowers from wild orchid crafts and cut my favourite Sue Wilson Ivy die out of some lovely pearlescent dark grey paper. I die cut their names out of the same paper using Crafters Companion's upper and lower case alphabet dies and added to the card. To finish I added a little glamour dust to her dress with a quickie glue pen and a few pearls.
Posted by Cara at 16:54