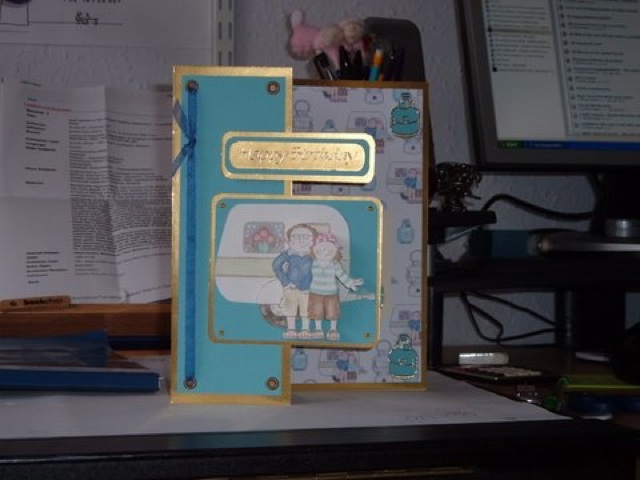 Thank goodness it's Friday. Gosh, I've come over all tired, maybe these three four hour days at work are too much for me! Just joking, I am tired and achy though, think I need to see my GP about increasing my morphine again as it feels like someone is drilling through my collarbone and shoulder. Right back to the important things and it is of course time to join the lovely Erika for Oldie Friday, where we laugh at how bad our old photographs are! Sorry, that should have been, show older crafting projects that people might not have seen before.
Hopefully you can make out in this dark photograph the card that I made for my Dad's birthday. Now, that was my desk in the background which means this must date back to about 2006 when I was at uni studying to become an occupational therapist. Those were the era of QVC craft days, I had obviously just bought a crop-o-dile judging by the rivets and they'd probably just had a Jolly Nation TSV going by the decoupage, matching backing paper and gas bottle stickers!
Parsley is safely back home and is currently snuggled up next to Bramble. According to his discharge notes he weighs 1.4kg or about 3lbs, Bramble weighs about 1.1kg from memory, so they're not big bunnies. Parsley had his teeth done but they had a small problem during the procedure as he woke up! They explained to me that as rabbits have a higher fatality rate under anaesthetic, they don't like to put them as deeply asleep as they would a cat or dog. This would have been ok, but the vet was rasping a tooth at the time and as he woke up he jumped forwards and so she caught the back of his throat with the rasp. It stopped bleeding quickly and there are no large abrasions. He's come home with antibiotics and pain-relief and has a check up with the vet tomorrow afternoon. Initially he was a bit sorry for himself and so I locked them both in the shed for a couple of hours. I went to check on them and Bramble was wanting to go into the run so I let them both out. Parsley was straight up onto the step they have in the run. He then spotted the dandelion leaves I'd left in the run for them and tucked into them, so I don't think I'll need to syringe feed him tonight! It amazes me how fragile they are and yet how resilient they can be.
Posted by Cara at 17:32